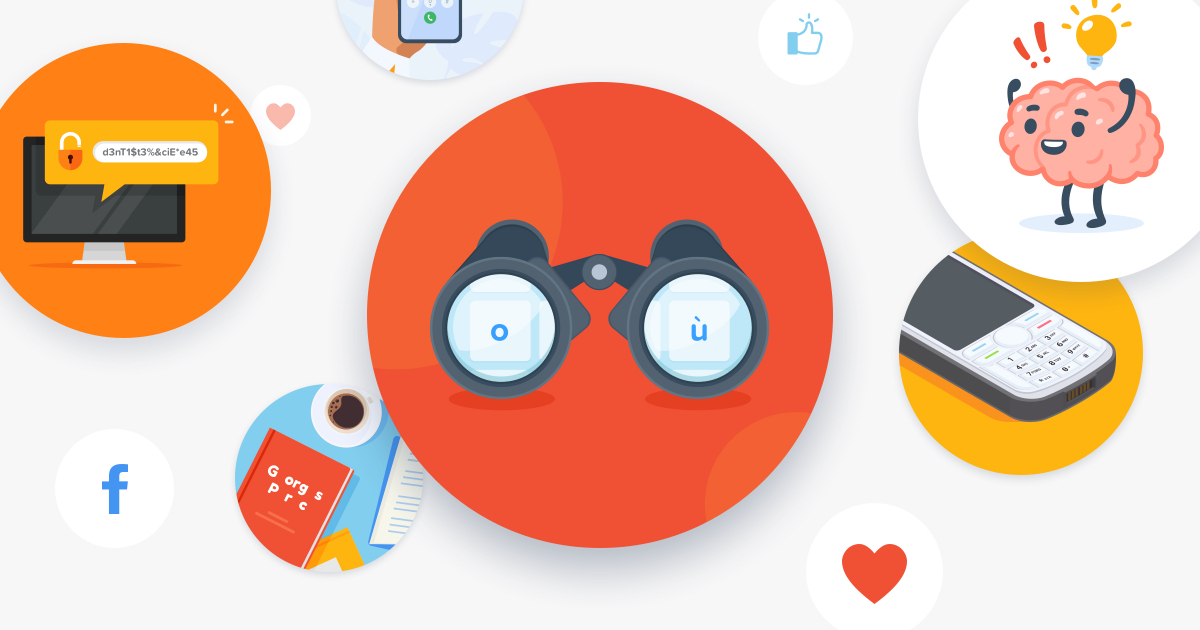 If you don’t follow us diligently on Facebook, you might have missed some of our fun and informative facts covering all kinds of topics concerning the keyboard. Here is a retrospective of the last year. Load up on anecdotes to satisfy your curiosity and that of your children, or to captivate your students at the start of their training sessions with Typing Pal.

This acronym, corresponding to the first six keys of a regular keyboard, has a rich and unusual history. Since the filing of a patent for a typewriter in 1878, this keyboard layout has been among the most widely used in the Western world, along with its close relative QWERTZ and its distant cousin AZERTY.

The first ever email, sent in 1971, was a sort of tribute to the layout. It was a message consisting of all the first row’s letters: qwertyuiop. Today, this complete sequence of characters is mostly used on social media to indicate that the person in front of the keyboard is dreadfully bored and has nothing else to write!

QWERTY even inspired a Czech astronomer, who used the acronym to name an asteroid, 6600 Qwerty, discovered in 1988. One final point: it’s one of the most common passwords on the planet. Do not use it!

Other Passwords to Avoid

Among the 10 most common passwords in 2021, we find “123456”, “qwerty123” and “1q2w3e”. If you use one of its kind, you should replace it! Instead, opt for a memorable and long password, containing numbers, special characters and capital letters such as: “6OPULENT-Plants*item”. Difficult to type? Not if you have mastered the right typing technique on the keyboard. One more reason for you to train regularly with Typing Pal. 😉

Do you know the most frequently used letter in English? To find out, take a look at this storage system formerly used to classify lead printing characters. Named a type case, this box was divided into compartments whose respective sizes and locations allowed easy access to the most frequently used characters. As you might have guessed, E is the most common. It makes up about 12% of characters used in text, followed by A and O at 8% and 7%.

The type case is also behind the words uppercase for capital letters and lowercase for small letters. Lead characters were once kept in two levels of a case. You’ve guessed it, capital letters were in the upper part, and the small ones within easier reach below as they’re used much more frequently.

Could you write without using the letter E ? A text where you omit one or more letters is called a lipogram, and it’s quite a challenge—one that French writer Georges Perec met on a grand scale in 1969. His 300-page novel La Disparition does not contain a single instance of this letter, which is the most commonly used in both French and English. The English novel Gadsby by Ernest Vincent Wright achieves the same impressive feat. It’s a shame the forbidden vowel appears in both their names! 😉

Did you know that French keyboards have a key for only one word? We’re not kidding: the Ù is used only in où (where) and has its own key.

Have you ever noticed that the number pad on your keyboard and the keys of a telephone don’t show numbers in the same order? 🙂🙃 The real reason is unknown but there are several theories. Here’s our favourite: The early keypad telephones of the ’60s couldn’t process numbers that were dialled too quickly, leading keypads to be reversed in order to slow down keyboard and calculator aces. Pfff, slowing people down, what a funny idea!

The Dawn of Texting

Before touch-screen phones came along, it took a full 16 clicks of the number pad just to text “hello.” Exhausting, right? That’s why SMS language was invented! Capitals, punctuation, and even vowels could all be left out, so that “See you later!” became “c u l8r”—much faster to type, if a bit harder to read!

Have you noticed that the keypad on your phone assigns letters to the numbers, except for the 1 and 0 keys? That’s because, originally, these were reserved for specific functions: 1 for long-distance calls, and 0 to speak to an operator.

Cna yuo read thsi tetx? It’s likely you can, and that’s because your brain doesn’t read every letter on its own, but instead analyzes them in pairs or as a whole word. And that’s another great reason to improve your precision on the keyboard—because your smart neurons might stop you from noticing a typo!

This famous shortcut that forces a computer to reboot was invented by IBM engineer David Bradley. Did you know that he chose these three keys to avoid accidental reboots? You need two hands for this combination, at least on a traditional keyboard. What a good idea!

The computer that guided the Apollo space mission had an unusual keyboard including two special keys, one for VERB and one for NOUN. These made it easier to enter commands because fewer keys had to be typed. The verb identified the action, and the noun, the element acted upon. Words themselves were coded by numbers.

Make sure to get all of our future by following our Facebook page right now!